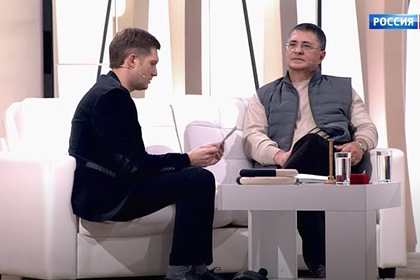 Doctor and TV presenter Alexander Myasnikov revealed his attitude to infidelity. On the air of the program “The Fate of a Man” on the TV channel “Russia 1”, he admitted that he would forgive his wife for infidelity. The release is available on YouTube.

When asked by the host of the program “The Fate of a Man” Boris Korchevnikov about whether Myasnikov would forgive treason, the doctor answered in the affirmative. “I would forgive treason. I hope I haven't, but I've been thinking about this all the time. Since childhood, I tried the situation of my parents on myself, “the doctor said.

The doctor said that his parents separated because of his father's betrayal, and he was very upset by the divorce of his parents in childhood. “When my mother divorced her father without forgiving her betrayal, she made several people unhappy. It was very difficult for me to live between my two parents, ”Myasnikov said. He added that her mother regretted her decision, but pride did not allow her to return to her father.

According to Myasnikov, he constantly had to lie to his mother about his father's life, when after the divorce she asked about him. “If you have a child, then you have to think about the consequences for the child,” he said and added that the separation of his parents greatly influenced him.

Myasnikov is married to Natalia Myasnikova, whom he met at one from social events. For some time she worked at TASS, and since 2012 she has been the founder of the “Clinic of Dr. Myasnikov”.