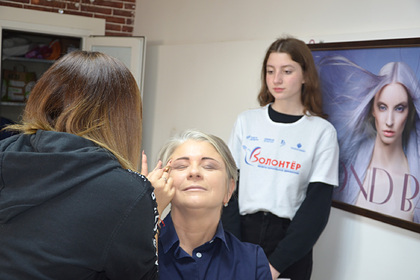 , in which mothers of children with disabilities were offered free beauty treatments. This was reported by the newspaper “Selskaya Nov”.

A ninth-grader Anzhelika Kalinichenko became the organizer of the action “Mother's Day”, which took place within the framework of the All-Russian charitable project. She was assisted in this by volunteer schoolchildren from other educational institutions and her grandfather, who “worked” as a personal driver for volunteers.

“Mother's Day is an emotional relief for a woman with a disabled child. As usual, in everyday worries she does not have enough time for herself. A trip to the hairdresser or makeup artist is an unaffordable luxury. And within the framework of the action, all this becomes possible completely free of charge, “the Russian woman said.

Together with other students, the volunteer independently found on Instagram accounts of salons and specialists providing services in the field of beauty and health, and invited them to participate in project at no cost. As a result, a masseur, an eyebrow artist and a make-up artist joined the action.

Three residents of the Yuzhny village agreed to take part in “Mother's Day”. The women received massage, eyebrow shaping and professional makeup. Later, a family photo session was held for the Russian women.

According to the volunteers, the action is planned to be held monthly, involving other workers in the beauty industry.

Earlier in November, 18 large residents of the republic received medals in Kabardino-Balkaria ” Maternal glory. ” With a medal, women with many children are also awarded 10 thousand rubles per child. The regional government donates a minibus to families with 10 or more children.