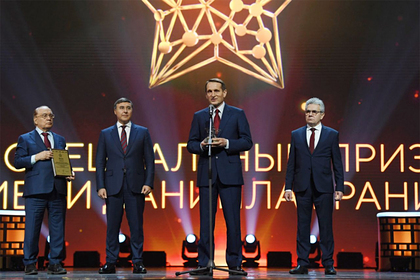 The State Kremlin Palace awarded the loyalty to science “- the only prize in the country, which celebrates the achievements of Russians in the field of popularization and promotion of science and scientific activity.

In the Year of Science, the award united a record 15 directions. The awards were presented to politicians, scientists, journalists, business and non-profit sector representatives. This became possible thanks to the support of Alisher Usmanov's charitable foundation “Art, Science and Sport”, which was a partner of the award and formed its prize fund.

Fatima Mukhomejan, director of the Art, Science and Sport Foundation, presented a special prize “for her contribution to the popularization of science and technology among young scientists”. The winner in this nomination was the head of the research group of the Russian Quantum Center Alexey Fedorov.

“The Art, Science and Sport Foundation, as one of the leaders of the non-profit sector and the country's leading philanthropic foundation, is consciously an active participant in the development of higher education in the country and the popularization of scientific activities among young scientists and the public in general. Our main mission is to develop and increase the potential of our country, “Fatima Mukhomejan noted.

Special awards were given for the popularization of the nuclear and space industries and the national project “Science and Universities.” It supports leading cultural and educational areas, initiates its own scientific, educational, social projects and projects for the development of mass sports. Implementing the projects ART-OKNO, # VSENASPORT and NKO-SOCRAT.