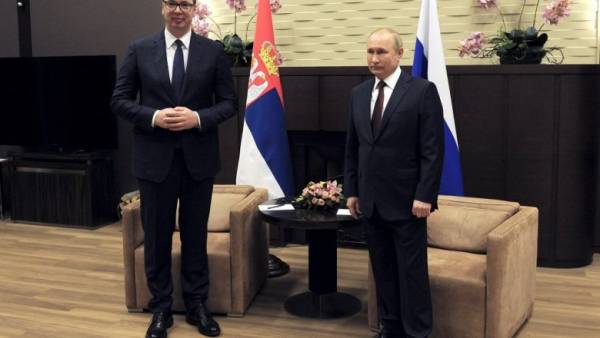 On & nbsp; last Thursday, Russian President Vladimir Putin received Vucic in & nbsp; Sochi, where they had a conversation on a wide range of issues & nbsp; As a result of the meeting, the President of Serbia said that & nbsp; the price of gas from & nbsp; RF for & nbsp; for the next six months for & nbsp; his country will remain at & nbsp; the previous level of & nbsp; $ 270 for & nbsp; 1000 cubic meters and & nbsp; that & nbsp; understanding has been reached on & nbsp; flexibility and supply & nbsp; .

According to & nbsp; he said, Serbia during & nbsp; during the energy crisis was helped by the completed construction of a gas pipeline from & nbsp; Bulgaria to & nbsp; Hungary, through which fuel went from & nbsp; Turkish Stream.

Earlier, he reported that at the current gas price relative to the market price in six months it would be possible to save 300 million euros, and indirectly – a billion.

“ I would have signed the price of & nbsp; 270 dollars so that & nbsp; we always have it, but & nbsp; will not & nbsp; be. Again we will prepare and & nbsp; fight to be the best, and & nbsp; I guarantee you, & nbsp; we will have the lowest price in & nbsp; Europe, not counting the CIS members. Of & nbsp; all the rest, we will have the most favorable price & raquo;, & nbsp; & mdash; stressed by the Serbian leader.

Now Russia is actually the only supplier of natural gas to Serbia, which in recent years has received over 2 billion cubic meters of this gas through a pipeline through Ukraine and Hungary.

The Nord Stream 2 project; involves the construction of a gas pipeline with a capacity of 55 billion cubic meters per year from the & nbsp; coast of & nbsp; RF through & nbsp; the Baltic Sea to & nbsp; Germany. The project is actively opposed by the United States, which is promoting its liquefied natural gas in the & nbsp; EU, as well as Ukraine, which is afraid of losing transit. The United States imposed sanctions on Nord Stream 2, requiring companies to immediately stop laying the pipeline. In & nbsp; RF repeatedly urged to stop mentioning “ Nord Stream 2 '' in the context of any politicization, since this is a commercial project, it is & nbsp; beneficial to both Russia and the European Union.