In the Novgorod region, in the basement of a village house, a rare artifact was found – a harrow 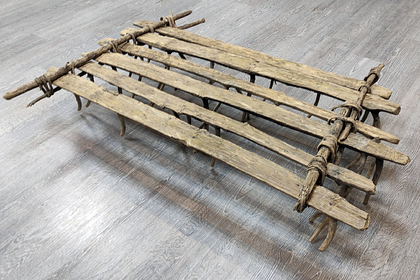 In the basement of a village house in Borikhino (Pestovsky district of Novgorod region) found a rare artifact – a harrow. This is a special device for soil cultivation. The find is reported in a group of the local museum of local lore on VKontakte.

“At first we tried to extract it [the object] for quite a long time, carefully excavated it, and finally were able to raise a harrow to the surface of the earth. You say, well, what's wrong with that ?! Why be surprised? And we will answer. This item turned out to be the rarest artifact: a knotted harrow of the 18th century, “the message says.

Local historians have suggested that this item was in the basement many years ago, when it fell into disrepair. Then she was thrown to the bottom of a deep hole. Subsequently, it became something like a footbridge in a damp basement.

The restored artifact is now on display in the museum.

Earlier, an expedition of the Institute of Archeology of the Russian Academy of Sciences found at the construction site of the Moscow-Nizhny Novgorod highway Kazan is a Bronze Age settlement with traces of buildings. The exposition includes metal and glass decorations, items of military equipment for horses and riders, household items, weapons and agricultural implements found in the underground of one of the buildings.