RTL Nieuws: The Netherlands are considering a new case against Russia in the case of MH17 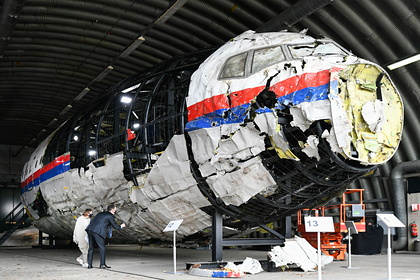 The Netherlands wanted to initiate new proceedings against Russia in the case of the flight crash MH17 in eastern Ukraine in July 2014. This was reported by the RTL Nieuws TV channel with reference to anonymous sources.

It is planned to prepare a legal procedure at the UN International Civil Aviation Organization (ICAO). The issue will be on the agenda of the new government, which is in the stage of formation.

Sources consider the new procedure promising for the Netherlands. In their opinion, Moscow violated the Chicago Convention, according to which countries are obliged to ensure the safety of civil aviation.

The final decision on filing a lawsuit against Russia in ICAO will be made by the new Cabinet of Ministers of the Netherlands.

777, which en route from Amsterdam to Kuala Lumpur, crashed on July 17, 2014 in the territory controlled by the self-proclaimed Donetsk People's Republic (DPR). 298 people died.

The investigation believes that former DPR Defense Minister Igor Girkin (Strelkov) and three of his subordinates – Sergei Dubinsky, Oleg Pulatov and Leonid Kharchenko were involved in the plane crash. They are accused of delivering a Buk air defense missile system from Russia to Ukraine, from which the airliner was shot down.

In July 2020, the European Court of Human Rights (ECHR) received a claim from the Dutch government against Russia due to the Malaysian Boeing MH17 shot down over Donbas in 2014. The Dutch authorities said they “want to achieve truth, justice and responsibility” in the case of the death of 298 people.

In the same month, the Ukrainian Foreign Ministry called on Russia to admit responsibility for the crash of the Malaysian Boeing MH17. The Ukrainian side promised to do everything possible to establish justice and punish those responsible. The department assured that they are taking measures within the framework of the process in the International Court of Justice to bring Moscow to justice for violation of obligations under the International Convention for the Suppression of the Financing of Terrorism.

Related materials00: 02 – July 17, 2019 The European Union called on Moscow to admit guilt for the MH17 crash “/> Suspects in the death of Boeing over Donbass have been named. Charges will be brought against three Russian citizens and one Ukrainian

Earlier, Ukraine and the European Union (EU) issued a joint statement in which they called on Russia to “admit responsibility” for the crash of the Malaysian Boeing 777, as well as to continue trilateral negotiations with Australia and the Netherlands “and make every effort to bring those responsible for the downing of flight MH17” .

Moscow denies any involvement in the downing of MH17. Russian Foreign Minister Sergei Lavrov said that Moscow provided all radar data on MH17, while Kiev refuses to give information from its radio tracking systems, as well as negotiations with the dispatcher.

According to him, Ukraine refers to the fact that allegedly during the crash all their radars were turned off.

Russian Ambassador to the Netherlands Alexander Shulgin, in turn, reacted to statements about threats to witnesses in the MH17 case. According to him, these statements are unfounded and are sucked from the finger. He also noted that the investigation ignores some of the circumstances in the MH17 case. In his opinion, these are double standards.

Investigators act very one-sidedly, ignoring important materials presented by the Russian side. Willingly, without any verification, they trust the Ukrainian representatives

Kremlin spokesman Dmitry Peskov said that calls on Russia to plead guilty for the June 2014 crash of flight MH17 in the skies over Donbas are inappropriate and unacceptable. He recalled that the plane crash took place in the skies over Ukraine.

In September it became known that Russian citizens Igor Girkin (Strelkov), Oleg Pulatov, Sergei Dubinsky and Ukrainian Leonid Kharchenko did not appear at the hearing in the case of the crash Boeing 777.

According to presiding judge Hendrik Steenhuis, the Russian authorities refused to interrogate the citizens, and the Ukrainian side stated that it did not know about Kharchenko's whereabouts. According to him, all four accused have the right to appear in court.

The judge promised to study additional materials that were provided by the investigation: interrogation of witnesses and expert opinions regarding previously received audio recordings.