Alexander Lukashenko: Polish politicians and the US want to destroy the EU 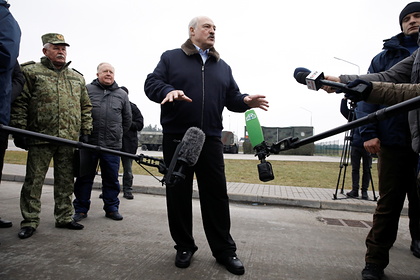 President of Belarus Alexander Lukashenko accused Polish politicians of intending to destroy the European Union (EU) … He spoke about this during a meeting at the Ministry of Defense of the Republic, reports the Telegram-channel “Pool of the First”.

He spoke about the trips of “Polish scoundrels” to foreign countries and pointed out the purpose of such visits. “Yesterday you noticed, [Polish Prime Minister Mateusz] Morawiecki where did he go? To the UK. I'm sure … Look, within a year or two, they want to destroy the European Union at America's suggestion, “Lukashenko explained.

The head of state said that the United States does not need partners who” can them “, and the UK withdrew from the EU, because” found nothing in this. ” At the same time, according to him, some Polish politicians are already openly declaring that they see no point in finding their country in the EU without billions of dollars in subsidies.

Earlier, Lukashenka made an appeal to the people of Poland and asked him to reason with his “ maddened “and” lost reality “leadership. In his opinion, due to the migration crisis, the Polish authorities are trying to solve the problems of financing from the EU and criticism of citizens in relation to the government.