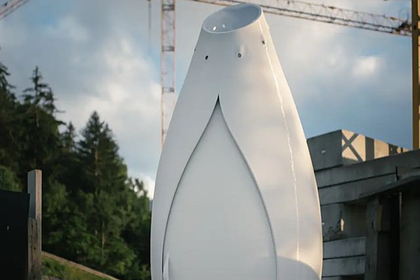 The garbage was melted into printer cartridges and a portable booth was produced in three days. The dry closet consists of three parts – a drop-shaped body, a sliding curved door and a bucket for collecting solid waste. In addition to plastic, there are metal guides in the structure, due to which the door moves. The device has a special feature – it allows you to separately remove urine and compost faeces in a special container. Subsequently, waste products will become fertilizer for the soil at the installation site of the toilet.

A test version of the booth was released on a robotic printer in Spanish Avila and installed on a construction site in the Swiss Alps. However, Nagami hopes that soon it will be possible to 3D print complex designs on more primitive devices than in their studio.

The authors of the initiative noted that so far 91 percent of the world's plastic waste is not recycled … This material is available everywhere, and it can cost-effectively create toilets where they are needed most – in urban slums and refugee camps.

Unusual public toilets were created by the office of architect Kengo Kuma in Japan. The latrines are made in the form of a small ridge and complement the landscape in front of Fujiyama. During the day, the structures resemble snow-capped mountain peaks, and at night they light up and turn into a kind of lighthouses.