Human rights activist Litvinovich: women in the colony are subjected to psychological violence 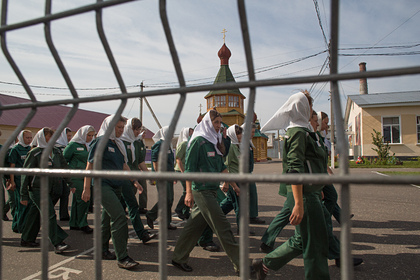 There are no tortures and rapes in Russian women's colonies, which take place in men's prisons female prisoners are subjected to psychological and physical violence, which can sometimes take on the character of torture. Human rights activist Marina Litvinovich described the scale of violence in women's colonies in an interview with Lenta.ru.

According to her, one of the largest problems of prisoners in women's colonies is the inability to go to the toilet when the need arises: women who work mainly in the sewing industry claim that they can go to the toilet once or twice per shift and this is given for about five to ten minutes. At the same time, about 70 people work in the production, and there can be only five toilets, and not everyone can have time.

“But in general, as you understand, when a person is not allowed to go to the toilet for a long time, this is torture. Moreover, it is connected with humiliation of human dignity. Women scream and feel pain from it. Of course, these things may not be as serious as we saw in the video from the Saratov colonies, but nevertheless it is also important, ”said the human rights activist.

Another humiliating violent practice Litvinovich called search activities in pre-trial detention centers, where employees search for prohibited items and force women to strip naked, squat and spread their legs wide. Moreover, if a woman has periods or is pregnant, it does not matter.

Speaking about prisons, Litvinovich also pointed to the issue of hygiene – once a week prisoners go to the bathhouse, but only half an hour is allocated for it, and there are fewer taps than people, sometimes there is no hot water, and it is impossible to wash well. Women are often reprimanded or sent to punishment cells (punishment cells) if they wash themselves in the sink. They have no free opportunity to take a shower even during their period.

“These are the house rules – showers only once a week. And they even apply to special detention centers where people end up for taking part in pickets, rallies or driving without a license, and not for some serious crimes, “she explained.

Beatings, boycotts with the parties of inmates who are the result of manipulation by prison officials, as well as forced shaving of the head or damage to things.

On October 5, the human rights project Gulagu.net published a video of the rape of prisoners in the hospital of the Saratov Federal Penitentiary Service. According to human rights activist Vladimir Osechkin, 40 gigabytes of video recordings of the torture of prisoners were filmed by employees of the department on official video recorders; later, other videos appeared on the Internet. Criminal cases were initiated, the situation was taken over by the Prosecutor General's Office, the State Duma and the Federation Council.

On November 25, Russian President Vladimir Putin dismissed the head of the Federal Penitentiary Service, Alexander Kalashnikov. As Interfax reported, the reason was the resonance caused by the publication of a video of torture in colonies. Deputy Minister of Internal Affairs Colonel-General of Internal Service Arkady Gostev has been appointed the new head of the department.