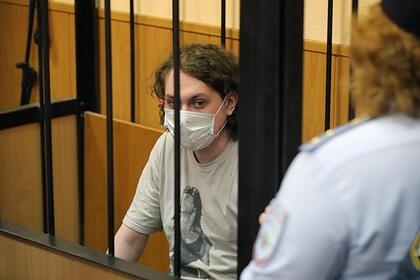 blogger Yury Khovansky wrote an open letter from the pre-trial detention center to the public and the media, in which he complained about threats and blackmail from the investigation. Photos of the letter were published in the Telegram channel “Khovansky is not a terrorist”.

In the appeal, the blogger said that he and his girlfriend Maria Nelyubova are threatened with problems if the conditions of the investigators are not met. According to Khovansky, the head of the investigation group in his case, without notifying the blogger's lawyers, came to the prisoner secretly and made the following demands: to testify that he sang a song about Nord-Ost in 2018, and not in 2012, to give up his lawyers and take the lawyers of the investigation team.

The investigator, as Khovansky writes, promised that if he fulfills the conditions, the case will be taken to court, where the blogger will receive a fine and be released. If he refuses, he will be given a real prison term. At the same time, according to him, earlier he had already tried to negotiate with the investigation. “I have already believed this investigator once – he promised to release me on recognizance not to leave, if at the very beginning I gave evidence and did not take 51 articles. I told him that I no longer believe him and that I am not going to confess what I didn’t do, ”Khovansky wrote.

In response, the blogger writes, the head of the investigation team gave him two days, saying that if he refused, he and his girlfriend would “have problems.” “I’m scared and I don’t know what to do. I was afraid in a pre-trial detention center before, but I never had to be afraid for loved ones on the other side of the fence. I did not think that in Russia in 2021 an investigator could openly threaten the family of the accused and demand to confess to what he did not commit, “the blogger added.

In conclusion, Khovansky drew attention to the fact that a similar situation can happen to anyone now. “Think, I have 4.5 million subscribers, and it took the Investigative Committee only four false witnesses to ruin my life. How much will it take them to break yours? Every third in crosses sits solely on the “testimony” of such “witnesses”, “he said.

In conclusion, the blogger also asked for help from the public for himself and his loved ones. “Without you, they will simply kill me,” concluded Khovansky.

The blogger's girl has already told about the proposed deal. “I came secretly to Yura and asked him to lie to himself, to give false testimony and promised him a mild punishment for this. Yura refused, then he said that he would receive a real term, “Khovansky told Nelyubova.