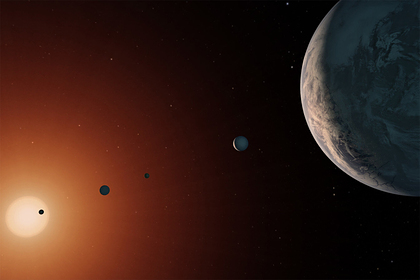 An international team of scientists has calculated how intensely TRAPPIST-1 exoplanets were bombarded in their early stages. This was done with the help of modeling, which showed at what intensity of collisions with celestial bodies a harmonious relationship between the orbital periods of the planets could be maintained. The results of a study revealing the possibility of the existence of water are published in the journal Nature Astronomy.

Scientists have created a computer model of the bombardment phase of planetary formation in TRAPPIST-1 to study the effects that its planets could withstand without losing harmony in the form of orbital resonance. So, the time required to complete one revolution around the star is 1.5 days on planet b and 19 days on planet h. Eight “years” on planet b correspond to five years on planet c, three on planet d, two on planet e, and so on.

Resonant orbits of planets like TRAPPIST-1 are formed when young planets are in protoplanetary disk of gas and dust move closer to their star. The resonance should be established before the disc disappears, so the TRAPPIST-1 planets formed quickly, in about one tenth of the time it took for the Earth to form. This means that the system has survived a minor meteorite bombardment. Scientists emphasize that in this case, the planets could receive fewer volatile elements that could be useful for the emergence of life.

One of the main differences with the Earth is that the planets could initially have a hydrogen atmosphere, and at the same time not to experience giant collisions like the one that led to the appearance of the Moon near the Earth. This could change the evolution of the planet's interior, degassing, water accumulation and other processes that are important for their future habitability.