In Germany, an entrepreneur vaccinated people against COVID-19 with a homemade vaccine 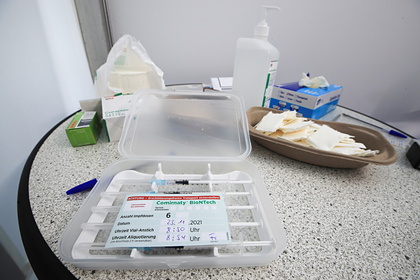 German law enforcement officers stopped vaccination near Lübeck airport (Schleswig-Holstein Germany), in which local residents were allegedly inoculated with an unapproved vaccine. This is reported in a statement by the Lubeck police department, RIA Novosti reports.

According to local media reports, Lubeck airport belongs to the doctor and entrepreneur Winfried Stecker, who offered a homemade vaccine against COVID-19.

Police said law enforcement officials found about 80 people in front of the small airport, with the number increasing over time. As a result, it was established that “vaccination is carried out with a drug that, apparently, is not approved for use.” Vaccinations were made in an office space specially prepared for this purpose.

It is assumed that about 50 people still managed to get vaccinated before law enforcement officers stopped what was happening.

On the eve, on November 27, in Germany with a high probability, a new strain of coronavirus from South Africa has been identified. Signs of a COVID-19 strain called omicron, which recently emerged in South Africa, was found in a German resident. The message was confirmed by the Minister of Social Affairs of the State of Hesse Kai Klose.