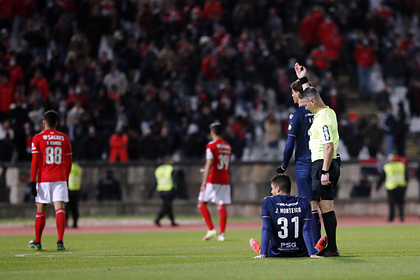 Portuguese football club Belenenses was forced to to put only nine players for the 12th round home match against Benfica due to the massive COVID-19 disease in the team, according to Sports.ru. It is noted that two of the footballers who entered the field are goalkeepers.

Due to the coronavirus epidemic, many of Belenesesh's footballers were unable to take part in this meeting. The team asked the Portuguese Football Federation to postpone the match, but they were refused. The team had to field nine existing players, six of whom had never played at such a high level before. Benfica put up their main squad for the match, scoring seven goals in the first half.

In the second half, the minority team decided to go for a trick, ending the match ahead of schedule. The team entered the field of seven people and immediately after the referee blew the whistle to start, one of the players left the football field due to an alleged injury. The match was stopped due to the fact that the team cannot play with six.

Earlier, the President of the International Olympic Committee (IOC) Thomas Bach praised the idea of ​​the International Football Federation (FIFA) to hold the World Cup every two years. According to him, the proponents of this plan are making the mistake of thinking that the conduct of the World Cup will bring FIFA twice as much money every two years.