Dynamo Moscow won 3: 2 over Rubin Kazan in the RPL match 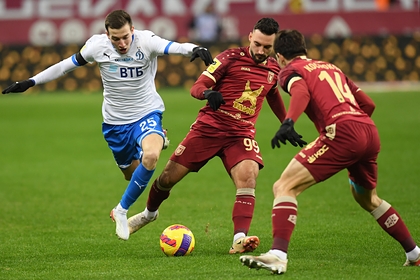 Dynamo Moscow won over Kazan “Rubin” in the match of the 16th round of the Russian Premier League (RPL). This was reported by the Lenta.ru correspondent.

The match took place in Kazan. The guests opened the score: midfielder Denis Makarov scored a goal in the Dynamo line-up in the 18th minute. Kazan responded to the blue-and-white strike with a goal from Soltmurad Bakaev in the 30th minute.

At the beginning of the second half, Rubin took the lead – Anders Dreyer converted the penalty. The blue and white managed to equalize the score in the 68th minute of the meeting through the efforts of Fabian Balbuena. In the 85th minute, the Muscovites snatched the victory. The ball was scored by Sebastian Shimanski. The final score is 3: 2 in favor of the blue and white.

Dynamo after 16 RPL matches takes the second place in the championship standings. Muscovites are one point behind Zenit, which is in first place. The blue-white-blue in the 16th round will meet with CSKA.

Rubin is in ninth place in the championship. The team has 22 points scored.