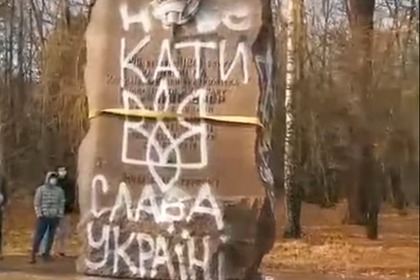 Another the monument to the Chekists – the fighters of the revolution, the portal nta.ua reports.

Just before the demolition of the monument in the village of Kalinovka, the inscriptions “NKVD – executioners” and “Glory to Ukraine” were applied to it, after which the monument was pushed off the pedestal with truck. Earlier, there were several attempts to demolish it, which were unsuccessful. One of the activists complained that law enforcement agencies began to persecute the protesters.

Earlier it became known that in the city of Dergachi in Ukraine, a monument to those who died in the Great Patriotic War fell victim to vandals. Police officers arrived at the scene, conducted an inspection and documented the damage. Unknown persons chipped off a piece of the statue, partially destroyed the tiled covering and demolished several sections of the fence around the monument.