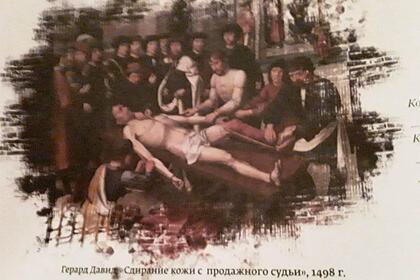 – for the image on the postal envelope in which she sent the letter to the Fourth General Jurisdiction Court of Cassation. She announced this on her Facebook page.

The most humane in the world Russia was able to create an exemplary court and where he disappeared00: 02 – 15 January 2018

The judge is venal in an envelope with a picture of Gerard David “Skinning a Corrupt Judge” depicted on it. After that, the Krasnodar activist was summoned to court with a demand for explanations to exclude disrespect for the court (Article 297 “Disrespect for the court” of the Criminal Code of Russia) and to consider the existence of grounds for imposing a court fine, and also threatened to transfer the envelope to the preliminary investigation authorities. The meeting is scheduled for December 7.

According to Antonova, the envelope contained a complaint against the decision of the Lenin court to refuse to invalidate the results of the elections to the Krasnodar City Duma. The activist also noted that the envelopes were printed by lawyers.

In 2019, the Arbitration Court of the Krasnodar Territory decided not to fine the creditor Stanislav Golubev, who sent documents depicting the same picture to the court. Golubev was suspected of contempt of court, and a special meeting was scheduled to find out. He himself claimed that the envelope was sent by his lawyer. At the hearing, Krasnodar lawyer Aleksey Avanesyan told the court that he also had such envelopes, and that “the image itself cannot offend.”