iDnes: Soviet T-35 tank was good only in parades 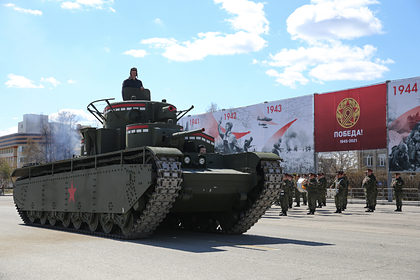 T-35 tank was good only in parades. In battle, the “Soviet monster” had no chance. The Czech edition of iDnes recalled the T-35 tank.

According to InoSMI.Ru, the main advantage of a multi-turret tank was considered to be the ability to fire several targets at once. “The armament of the T-35A tank consisted of three cannons and five 7.62 mm machine guns. Thus, each turret had one machine gun with or without a cannon. Since 1936, sometimes a sixth cannon was installed on the roof of the main tower, designed to fire at low-flying aircraft, ”the newspaper writes.

According to iDnes, the presence of several towers increased the size and weight of the tank. “But the T-35 tank's armor was too thin, for example, on the sides and front of the turret it was 20 millimeters, which, combined with the large size and sluggishness of the tank, which was easy to target, did not leave a great chance of survival in battle.” , – the publication says.

In September, the general director of TsNII Prometey, Alexei Oryshchenko, revealed the secret of the tower of the T-34 tank, which the Germans could not repeat. According to him, during the Great Patriotic War, the company invented a seamless casting tower for the T-34. It was much stronger and of better quality than that of German tanks, and provided higher protection and faster assembly of the armored vehicle. The Germans could not copy this technology during the entire war.