Krasnodar and Khimki drew in the RPL round 16 match 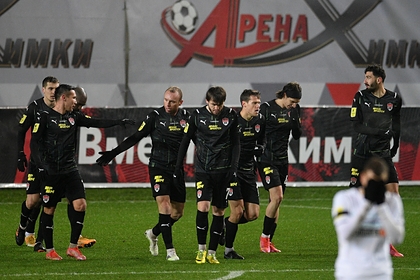 Russian Premier League round 16 match (RPL) between Khimki and Krasnodar ended in a 3: 3 draw. This was reported by the Lenta.ru correspondent.

The meeting took place at the Arena-Khimki in the Moscow region. Already in the sixth minute of the confrontation, the guests opened the score. Victor Klasson distinguished himself. Khimki played only in the second half. In the 54th minute, Elmir Nabiullin delivered an accurate blow. Then a goal by Denis Glushakov allowed the Moscow Region club to come out ahead. Remi Cabella from Krasnodar equalized the score in the 68th minute. In the 72nd minute, Khimki again took the lead thanks to the efforts of Alexander Dolgov. And in the 81st minute Vladimir Ilyin helped the guests to level the score for the second time. Thus, six goals were scored in the confrontation. The final score is 3: 3.

Khimki is one of the championship's outsiders. The team is ranked 14th after 16 league matches. Krasnodar is in fifth place, three points behind the three leaders of the RPL.