Russian Ambassador to Washington Antonov: 27 Russian diplomats with their families will leave the United States on January 30 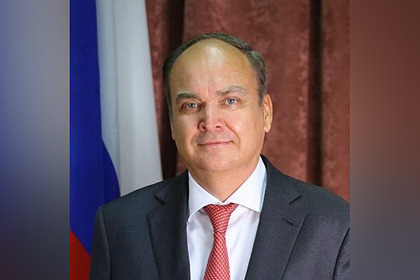 Russian Ambassador to Washington Anatoly Antonov on YouTube- Soloviev Live announced that 27 Russian diplomats and their families would leave the United States on December 30.

Our diplomats are being kicked out. On January 30, 27 people with their families will leave us, and on June 30, a similar number will leave. There is no overgrowth of the number of contacts into quality indicators. In reality, we are still perceived as adversaries. The atmosphere is poisoned by Russophobia

Anatoly AntonovRussian Ambassador to the USA issue visas, and all this in light of Washington's declaration of respect for the family and traditional values.

Earlier, the representative of Russia in the Sixth Committee of the UN General Assembly, Sergei Leonidchenko, said that Moscow had asked the United Nations Secretary General for help because of problems with issuing US visas to diplomats.

He indicated that the Russian delegation has been facing problems for more than four years. problems arising from the United States' inadequate compliance with its obligations under the Headquarters Agreement. According to him, the country systematically refuses to issue entry visas for the staff of the permanent mission to the UN and for delegates from Moscow.

Relations between Russia and the United States

Antonov called the US approach one-sided, since Washington discusses with Moscow only issues in the sphere of its interests. According to him, the attitude of the United States has not changed, and Russia is still regarded as an adversary.

The American administration has not changed its negative attitude towards us. We are still regarded as opponents here. I have no authority to talk about the details of the negotiations that I have just outlined, but I think you are not surprised if I say that only one topic dominates everywhere – this is the “aggressive policy” of the Russian Federation on our western borders

Nevertheless, the diplomat noted the positive in contacts between the United States and Russia, contacts between state officials are becoming regular. In addition, four rounds of consultations on cybersecurity have taken place, and “the first shoots of positive results” have emerged in this direction.

Russia is not going to attack Ukraine

Antonov also commented on reports of an allegedly impending Russian attack on Ukraine. According to him, these accusations are related to attempts to hide the failures in the policy of Ukrainian leader Volodymyr Zelensky, and Moscow is not going to attack anyone.

This hysteria, which is simply evident today in relation to the alleged Russian threat, in my opinion, is a desire to justify the failures that the current president of Ukraine has. We are open here and constantly speak in the media, and we say to political scientists and the US administration: Russia is not going to attack anyone

Anatoly AntonovRussian Ambassador to the United StatesRelated materials 00:01 – 16 November “They make scapegoats of whites” How the fight against racism is splitting America and leading it to civil war? 00:02 – November 20

Indigenous here no place. Millions of people in the United States and Europe endure poverty and humiliation. Why are small nations not being protected there?

The Ambassador noted the expansion of the range of supplies of American weapons to Ukraine. According to him, Kiev received a portable anti-aircraft missile system (MANPADS) “Stinger” and an anti-tank missile system (ATGM) “Javelin”, even Russian Mi-17 helicopters got there. He added that these weapons are declared defensive.

Antonov commented on the settlement of the conflict in Donbass, saying that Washington was never able to make specific offers of assistance.

Earlier, the head of the Main Intelligence Directorate of the Ministry of Defense of Ukraine Kirill Budanov said that Kiev was the first to use American portable anti-tank missile systems in Donbass Javelin. According to him, they will be used along with the Turkish Bayraktar drones and will become a significant psychological deterrent.

Budanov also said that Russia plans to invade Ukraine in late January or early February. According to him, for these purposes, Moscow has concentrated over 92 thousand troops near the Ukrainian borders and the intervention will include airstrikes, artillery and armored attacks, as well as an amphibious assault in the east of the country.

NATO should not test Russia's strength

Antonov stressed that NATO should not test the strength of the Russian defense, Moscow will not be afraid of the military potential of NATO.

There are suggestions that some desperate head may appear in Ukraine or a group of fighters who will try to test the strength of the Russian defense, counting on the fact that we will not answer, we will be afraid of the NATO potential

Diplomat said that this is a very dangerous delusion. He added that currently the countries of the North Atlantic Alliance are developing the Black Sea and Ukrainian territories, but Russia is not afraid of such a development of events.

Earlier it became known that the United States is discussing the possibility of sending military advisers and weapons to Ukraine against the background of the alleged concentration of Russian troops at the border. Prior to this, US State Department spokesman Ned Price said that Washington did not know Moscow's intentions. Nevertheless, the diplomat noted that the United States is familiar with the schemes by which Russia operates.