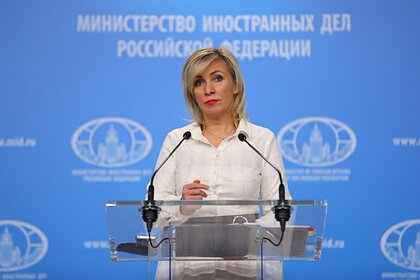 demanding to take back migrants and reproached the leaders of European countries for hypocrisy in relation to illegal immigrants. The diplomat wrote about this in her official Telegram channel.

Here is a right turn. Who in Europe are called Hitler's heirs and why because of them the society was on the verge of split 00:02 – 20 November people in the US and Europe endure poverty and humiliation. Why are they not protecting small peoples there?

Zakharova suggested that London turn to the “Summit of Democracies” with the question of the return of migrants. “So that no one has any doubts about how the current 'leaders of the democratic world' feel about refugee status, which their predecessors developed and approved,” she said.

“I think a substantive exchange will take place during the meeting. experience in the implementation of human rights in practice: how Poland did not allow migrants to Germany, how Britain sent refugees to France, how the EU did not see the use of special equipment against children and women by the Polish security forces, ”said the representative of the Foreign Ministry.

Earlier Politico reported that British Prime Minister Boris Johnson invited French President Emmanuel Macron and European Council President Charles Michel to conclude a readmission agreement, according to which migrants who entered British territory through the English Channel will be returned back to France.