Singer Vera Brezhneva starred in a blue bra, mini-skirt and with artificial wings 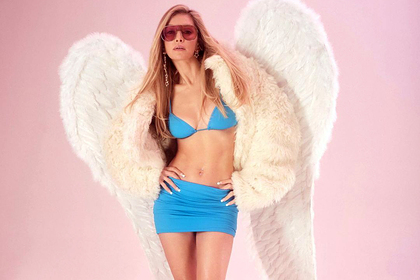 excited the fans. A corresponding series of pictures appeared on her Instagram page.

In the photos posted on the network, the 39-year-old celebrity poses in several images. So, for example, she was captured in a blue bra and mini-skirt combined with a beige fur coat and high-heeled boots. The image of Brezhneva was complemented by glasses with pink lenses, earrings and artificial wings.

In another shot, the singer poses in a pink mini-skirt and a translucent crop top. In addition, she starred in close-up topless. “I love shooting like this, when the image gives you the opportunity to reincarnate,” she signed the post, which gained more than 24 thousand likes in three hours.

Fans appreciated the young and slender physique of the star in the comments. “Delightful woman”, “Every year she is younger and younger. Verusik, beauty ”,“ Sex symbol of the country ”,“ Gorgeous legs ”,“ You are beautiful, I won't get tired of repeating that, ”they admired.

In August, Vera Brezhneva revealed the secret of her youth. According to her, in order to maintain an attractive appearance, first of all, it is necessary to monitor health, both physical and psychological. The singer also said that she tries to go to bed before 23:00.