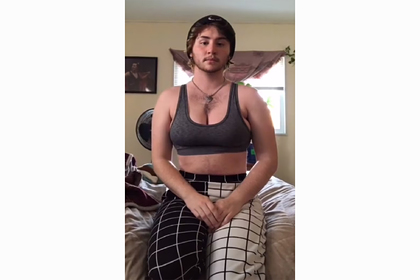 A transgender man from Ohio complained about difficulties in living with female breasts … The corresponding video on TikTok was noticed in the Daily Mail.

19-year-old Adonis Zeigler (Adonis Zeigler) shared a video, where he talked about the difficulties he faced in the process of changing sex. The hero of the material explained that due to financial difficulties, he was not able to complete his transition completely, so his appearance began to raise questions from others. So, for example, haters regularly insult him because of the presence of breasts. “I'm confused, why do you have a beard?”, “What the hell, why do you have breasts?” – they write.

Zeigler is known to have started his transformation in 2017 with hormones, which gave him abundant vegetation all over his body and face. However, he did not have enough funds for major operations to remove the mammary glands and modify the genitals.

“I am only 19, I am from a poor family, I have no job. Not everyone is lucky with wealthy parents who can finance such complex surgeries. Stop asking such questions to transgender people if you are not ready to pay their bills, ”he said on the video footage, adding that he was tired of insults.

Zeigler's post went viral with 4.9 million views and 562,000 likes. In addition, in subsequent videos, the young man explained that he had to quit his job, as he had an irregular schedule and a low salary. According to him, colleagues often treated him disrespectfully.

“I do not communicate with my parents and have never asked them for help. (…) I am afraid that I will never be able to complete my transition, because even when I save money, life throws me up in emergencies that are costly, “Zeigler admitted.

Po According to Healthline, the cost of an operation to modify the mammary glands required for the hero of the material varies from three to 10 thousand dollars (from 224 to 746 thousand rubles).

In October, the transgender actress appeared in public in a dress. 13 Reasons Why star Tommy Dorfman attended American Ballet Theater's Fall Gala in a black maxi dress with short sleeves and a train, which is decorated with a cutout at the back and high slits on the sides. It is known that the celebrity announced her gender reassignment in July 2021.