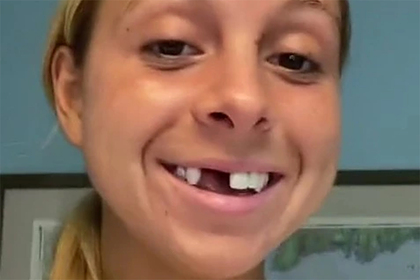 A girl with false teeth started filming herself on camera without them and became famous on the net. The Sun journalists drew attention to her TikTok page.

Blogger Lilyy, who has more than 590 thousand subscribers, regularly shares entertaining videos with stories about her life on her page. In addition, she does not hesitate to show her smile without a prosthesis and shoot comic videos in which she plays her friends.

In one of the latest publications, she captured herself without front teeth and make-up with gathered hair. Lily then changed into leather pants, a black top with red sleeves, as well as her hair, natural makeup and a smile with a prosthesis. “Sometimes I look like this, and sometimes I look like this. With or without teeth, I remain myself, “she said.

The publication went viral and got more than 1.9 million likes and 62 thousand likes. Subscribers appreciated the appearance of the heroine of the material and praised her for her sincerity in the comments under the video. “You are beautiful in both the first and the second image,” “I like that you approach this with humor,” “You are beautiful,” “I love your videos,” they wrote.

In August the woman popular because of her beauty turned out to be toothless and showed her real face. 36-year-old Alicia regularly appears in front of the audience with long hair extensions, bright makeup and even white teeth. In one of the videos, the blogger decided to show the fans her natural appearance and pulled out an artificial jaw from her mouth: the heroine of the material turned out to be completely toothless.