Science Advances: The Arctic Ocean has been getting warmer since the beginning of the 20th century 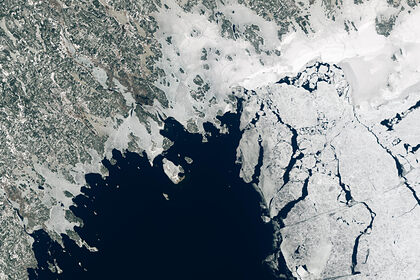 several decades earlier than scientists thought. The real situation with warming in the Arctic was revealed by an international group of scientists who reconstructed changes in the temperature of sea water in the Fram Strait between Greenland and Svalbard. The results of the study are published in the journal Science Advances.

Researchers analyzed the chemical composition of marine microorganisms and found that the Arctic Ocean began to heat up at the beginning of the last century, when warmer and saltier waters poured out of the Atlantic – this is a phenomenon called atlantification, preceded the warming. Since 1900, ocean temperatures have risen by about two degrees Celsius, while sea ice began to recede and salinity has increased.

Atlantization is one of the reasons for the warming of the Arctic, but satellites began to track it in the 40s years. As the Arctic Ocean gets warmer, ice melting (not only sea ice, but also land ice) increases in the polar region, which in turn affects global sea level. Melting permafrost could lead to the release of large amounts of methane.

In a future warming scenario, water circulation in the Labrador Sea is expected to further slow down due to the melting of the Greenland ice sheet, which is believed to be the cause of atlantification. Climate simulations generally do not reproduce this kind of warming in the Arctic Ocean, indicating an incomplete understanding of the mechanisms that govern this ocean warming.