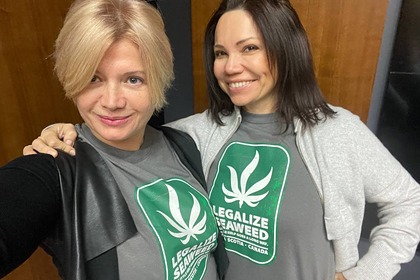 Victoria Syumar put on T-shirts with marijuana and joked about the upcoming coup in Ukraine. One of the parliamentarians published a corresponding entry on her Telegram channel.

Gerschaneko posted a photo in which she stands in an embrace with Syumar. At the same time, both deputies are wearing T-shirts with an image that looks like a hemp leaf and the demand for the legalization of seaweed.

The post is accompanied by an ironic commentary with reference to the statement by the President of Ukraine Volodymyr Zelensky on the preparation of a coup d'etat in Ukraine. “We are preparing for a coup. In parallel with [businessman Rinat] Akhmetov, if anything, “Gerashchenko writes.

Earlier, during the press marathon, Zelensky said that he had received information about a coup d'etat planned in Ukraine, which was to take place on December 1. According to the head of the republic, he was also informed that Akhmetov was involved in the impending overthrow of the current government and billions of dollars were allocated for this.