Napoli Today: a monument to footballer Diego Maradona was erected in Naples 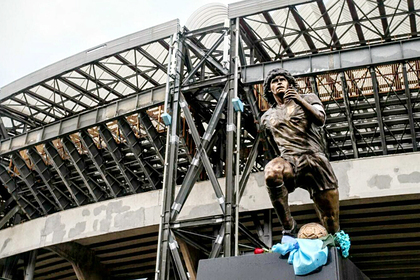 The monument was created by sculptor Domenico Sepe. The bronze statue represents Maradona running with a ball at the moment of the game. The footballer played for the local club Napoli in the 1980s. The installation of the monument took place on the first anniversary of Maradona's death. The final place where the monument will stand will be determined later.

Maradona died on November 25, 2020 at the age of 60. The cause of death was acute pulmonary edema caused by heart failure. Law enforcement authorities suspected the athlete's personal doctor and the nurse on duty in his house of negligence. As a result, in May 2021, seven doctors were charged with the manslaughter of a star.

Maradona is known for playing for Barcelona, ​​Napoli and Newells Old Boys. As part of the Argentina national team, he became world champion in 1986. Maradona is considered one of the greatest players in football history.