President of Belarus Lukashenko addressed the peoples of Poland and Germany 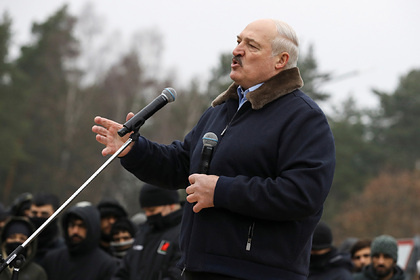 President of Belarus Alexander Lukashenko addressed the peoples of Germany and Poland during a speech refugees at the Belarusian-Polish border. This was reported by the Telegram channel “Pool of the First”.

Addressing the Germans, he said that most of the migrants gathered at the cordon want to “reunite their families” in Germany and find their relatives and friends there. “Please take these people to your place. It's not a big load. They want to live in Germany, “Lukashenko said.

Related materials 00:01 – 18 November Europe, than they will return home “How migrants on the border with Poland changed life in Belarus 15:25 – 19 November Border station. and Belarus – about the breakthrough to Europe, life in the camp and the fear of deportation

According to him, the acting chancellor of Germany, Angela Merkel, agreed that her country could accept two thousand refugees, but “everything is being blocked by the Poles.” The Belarusian president asked the people of Poland to reason their “distraught” and “lost reality” leadership and stressed that due to the migration crisis, they are trying to solve the problems of funding from the EU and citizens' discontent with the government.

“To distract from these problems, they (the authorities of Poland – approx. “Lenta.ru” ) staged this massacre on this border. Therefore, I ask the Poles once again, I ask you insistently. We do not need any clashes, let alone wars. Let these people go to Germany, “the head of the republic added.

Earlier it became known that Lukashenka arrived at the transport and logistics center on the border with Poland, where migrants were previously accommodated. He examined the food distribution point, talked with representatives of the Red Cross, and also told the refugees about the “distraught” Europeans.