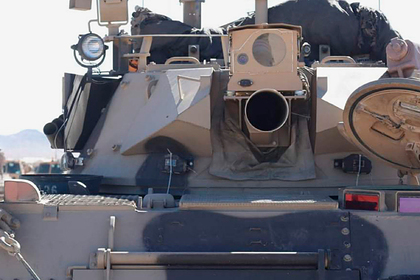 11th The US Army Armored Cavalry Regiment has modernized the models of Russian T-72, T-80 tanks and BMP-2 infantry fighting vehicles. The unit imitates the actions of a conventional enemy during exercises. This was reported by Rossiyskaya Gazeta.

The regiment, which is deployed at the US Army training center in California, uses detailed models of Russian military equipment. The vehicles received rotating turrets with gun simulators. The dummies are built on the chassis of the M113 armored personnel carriers.

The imitation of weapons on the dummies of Russian equipment received a stabilization system and modern sights. This allows you to act at any time of the day. The vehicles were equipped with laser simulators of defeat, which record a conditional hit.

The publication notes that the mock-ups of equipment were equipped with new sighting devices. Also at the American exercises, the models of the ZSU-23-4 Shilka anti-aircraft guns are replaced with machines that imitate the 2S6 Tunguska complexes.

Earlier in the United States, eyewitnesses noticed the models of the T-72 tank and the S-300 anti-aircraft missile system … The model of the air defense missile system received a pixel camouflage, which is used by the People's Liberation Army of China (PLA).

In October, the British military showed the models of the Russian BMP-3. The moving target is designed to practice visual target identification. The model received an imitation of the main gun, smoke grenade launchers and a twin cannon.