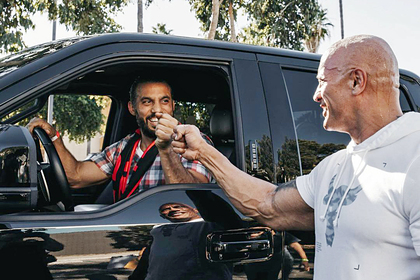 The 49-year-old artist held a special screening of his new film “Red Notice” in Los Angeles, during which he treated visitors to free food and his own Teremana tequila. For one of his fans, he made a special surprise and gave him his own pickup.

Johnson said that Oscar Rodriguez now works as a personal trainer, takes care of his 75-year-old mother and helps women who have faced domestic violence. “Proud and humble veteran of the Navy. A good man, “the actor added.

He took Rodriguez to the car and asked him to read a note that was lying in the front seat. It said, “Thank you for your service, brother. Enjoy your new pickup. ” The admirer who read it sat down on the pavement and began to cry. Then he hugged Johnson and got behind the wheel of the car, continuing to thank the actor for the gift.