Bloomberg: UK decided to save on railroad construction 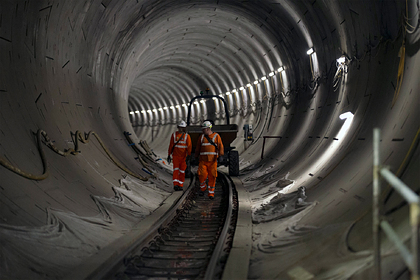 the most important projects for the development of the country's transport system, writes Bloomberg. Some local politicians accused the authorities of treason.

Prime Minister Boris Johnson announced the Northern Powerhouse Rail program in January 2019. It included the construction of railways, the modernization of the railway infrastructure in Northern England, which was noticeably inferior to the more prosperous south of the country, as well as the improvement of rail links between regions throughout the country. As part of the program, a new metro station was planned in Manchester to expand the HS2 high-speed rail line.

In mid-November 2021, the authorities decided to almost halve the program's budget of £ 34 billion ($ 46.5 billion). Due to cost savings, the construction of the Leeds-Birmingham high-speed line was canceled, and the road between Manchester and Leeds was only upgraded – a new modern line was originally planned. UK Transport Secretary Grant Shapps said the changes will bring quality railways to the northern parts of the country 10 years earlier than if Northern Powerhouse Rail is fully implemented. However, the publication believes that the real reason for the rejection of the program is the desire of the authorities to save money amid high costs due to Brexit and the coronavirus pandemic.

The government's decision caused discontent among the deprived areas. Greater Manchester Mayor Andrew Burnham said the program cut would hold back northern development for another 100 years, while Liverpool Mayor Steve Rotheram called the government's help “scraps from the table.” The mayor of West Yorkshire, which includes northern Leeds and Bradford, likened the government's actions to betrayal.

Due to the congestion and low capacity of the railroad, the fastest train between Manchester and Leeds covers 36 miles (58 kilometers) in 49 minutes, which is very slow by European standards. The UK is among the underdogs in terms of the share of high-speed rail in its overall network compared to other European countries, Spain, Finland, France, Denmark and Poland. The construction of high-speed lines would solve these problems.

Northern Powerhouse Rail was expected to attract investment and create workers. “The North depends on a creaky Victorian infrastructure ( infrastructure created in the Victorian era, which lasted from 1837 to 1901 – approx.” Lenta.ru “), undermining its economy, the quality of life of the population and the ability to reduce harmful emissions “- said researcher at the think tank at the Institute for Public Policy Research in the North, Marcus Jones. Reducing the scale of the program will scare off a significant part of investors.

Not everyone in the capital agrees with the claims of the northerners. One of the members of the London Assembly said that the leaders of the north are silent about the presence of pockets of acute poverty in London and pretend that all the streets of the city are “paved with gold.”

By the end of October 2021, inflation in the UK reached its highest level from November 2011, accounting for 4.2 percent in annual terms. According to the Bureau of National Statistics, the country has seen a significant increase in the cost of transport, fuel, including gas and electricity, as well as food in restaurants, and prices for used cars have also increased.