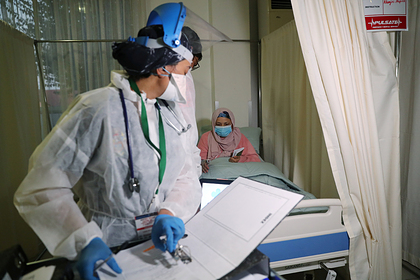 biology them. V.A.Engelgardt, Corresponding Member of the Russian Academy of Sciences Petr Chumakov explained to Lente.ru what the potential danger of the new COVID-19 strain is.

Earlier, the World Health Organization convened an emergency meeting on the new strain coronavirus B.1.1.529, recently discovered in Botswana, South Africa and Hong Kong. A preliminary analysis revealed a large number of mutations in it, and British scientists suggested that the virus originated in a patient with a weakened immune system, probably an AIDS patient.

“As you know, there are a lot of people with acquired immunodeficiency in Africa, a significant part of the population is infected with AIDS, so Africa is such a dangerous reservoir in which dangerous options can arise,” Chumakov said.

The biologist explained that the variants of the virus that originate in the body of immunodeficient people are especially dangerous, because if the virus gets to an ordinary person with a strong immune system, the body begins to actively fight it, and the virus leaves it after a few days, and in the case of with immunodeficiency, everything happens differently. “Once in the body of an immunodeficient person, COVID-19 stays there long enough and begins to adapt to the conditions in order to stay there as long as possible. Since the immune system is weak, its constant presence occurs, and in the process of being there, it begins to mutate, and at the same time such variants are formed that are able to stay in the body for as long as possible, that is, this is such a bioreservoir in which the evolution of the virus takes place, “he said. .

According to the biologist, the new strain may turn out to be more pathogenic and deadly than the delta strain, since it is likely that it has already adapted and has gone through many stages of mutations. “Naturally, now we need to study all the properties of a new strain in order to assess how much the vaccines that are now in the world will be able to prevent diseases with this new strain, and this is a very important question, because if it turns out that vaccines do not suppress it, then it will be necessary to urgently make such a version of the vaccine based on a new strain, which will protect against this strain too, “Chumakov concluded.