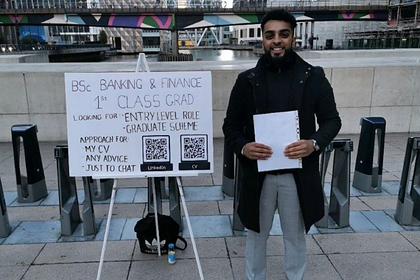 hours by means of an ad written on a plate. This is reported by MyLondon.

Malik graduated from Middlesex University and received a degree from the Faculty of Banking and Finance. He began his job search early in the pandemic and was interviewed at Zoom. However, according to the young man, the attempts did not bring results, because the video call format does not allow the candidate for the vacancy to fully disclose.

When the restrictions were lifted, the Londoner decided to buy a board, write on it information about his education, the desired position and attach QR codes, which could be scanned to quickly access his resume and profile on LinkedIn. So he hoped to get a job. On November 2, Malik took the board, went outside and went with it to the business district in East London Canary Wharf.

Related materials 18:36 – November 2 Working for yourself. How Moscow helps self-employed people make their dreams come true00: 01 – May 7 At 6:45 am, the young man arrived at Canary Wharf, put up a sign and waited for a reaction from passers-by. “The first five or ten minutes I was nervous because I stood there empty-handed. I was very embarrassed. I didn't know what I was doing, it seemed very strange to me. I had all my resumes in my bag. I stood there empty-handed, trying to look at people and hoping to get to know them, instead of taking the initiative and talking to them, “Malik said.

After some time, the Londoner grew bolder and began to wish good morning to the people passing by, and soon they themselves began to approach him and give him business cards and phone numbers. One of them, a man named Emmanuelle, posted a photo of Malik with a sign on the Internet. He confessed to the young man that he had dreamed of doing something similar before, but was scared.

Already at 9:30, Malik received the first message from a potential employer with an invitation to come for an interview at 10:30. A few days later, the Londoner was invited for a second interview, and on the 5th of November he was offered a job. According to the alumnus, all this time his phone was torn from calls with various proposals, and all this happened thanks to Emmanuel, whom Malik invited to dinner to personally say thank you.

Earlier it was reported that a homeless man from the English city of Wakefield , West Yorkshire, found a roof over his head thanks to honesty and frank inscription on the plaque. In the text, he said that he does not use drugs and alcohol, but is simply looking for a job.