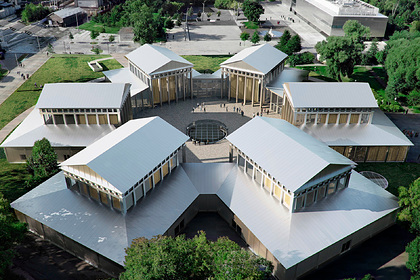 found himself at the center of a scandal. The public movement Arkhnadzor opposed the project of its restoration, prepared by the Garage Museum of Contemporary Art. The association's website offered to publicly discuss the initiative.

“Arhnadzor calls on the Department of Cultural Heritage to reject the act of consent with the examination and to postpone the approval of the project, fraught with the loss of the authenticity of the monument, until a new act is received. We propose to organize a public discussion of the project on the spot, with the open participation of heritage experts and city defenders, ”said the representatives of the movement.

The Moscow Garage Museum presented a project for the restoration of the building on November 22. “Hexagon” was one of the pavilions of the ensemble of the first Agricultural Exhibition in 1923. The website of the museum indicates that the authors of the project intend to take care of the preservation of the monument: “Keeping the subject of protection of the” Hexagon “(volumetric-spatial solution, location, materials of the columns and the location of the fountain bowl), the Museum clarifies and expands its architectural program.” The controversy around the “Hexagon” flared up after the publication of the act of the historical and cultural expertise of the project.

After studying the document, Arkhnadzor was also outraged by the fact that during the restoration of the building they would “replace the existing structures, taking into account the new functional use” and “make a frame in metal”. Participants of the movement also believe that the walls of the monument should not be sheathed with aluminum sheet instead of historic wood panels and that parts of the pavilion should not be connected with an underground space. “The purpose of replacing the frame, that is, disassembling it, is unhindered burrowing into the ground,” the association says.

At various times, the “Hexagon” was used as a dining room, restaurant and dance floor, but in recent decades the pavilion was abandoned … Garage decided to equip the building with three exhibition halls, a bookstore and a cafe, and make the courtyard an open public space. The Japanese architectural bureau SANAA was involved in the project.

In the summer of 2021, the Moscow building at 8 Gogolevsky Boulevard was returned to the old look of the dining club. The house has the status of a monument of cultural heritage of the region in the style of constructivism, and with the help of restoration the authorities of the capital “returned” it to the distant 1930.