In the Krasnoyarsk Territory, a man survived a bear attack and escaped thanks to a note 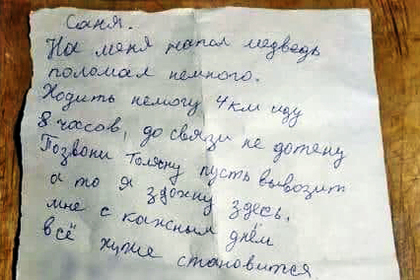 In the Krasnoyarsk Territory, a man survived a bear attack, crawled eight kilometers saved thanks to a note. This is reported by Taiga.info.

The most terrible beastCannibal hippopotamus and bloody festival in the best wildlife shots00: 02 – December 29, 2019

Crocodiles, boars and monkeys have declared war on humans. Nobody knows how to stop them

According to the Telegram channel Baza, the 58-year-old Russian was setting traps when he was suddenly attacked by a bear. The hunter's dogs frightened off the predator, but the animal managed to seriously injure the man. Due to injury, he could not walk, and he had to crawl to the hut of a friend to ask him for help.

The man was not there, and the hunter left him a note that read: “Sanya, on me a bear attacked, broke a little. I can't walk, I walk four kilometers for eight hours, I can't reach the connection. Call Tolyan, let him take it out, otherwise I'll die here. I'm getting worse every day. ” At the end of the text, the author dated the note on October 31 and promised to pay for the help with two barrels of gasoline.

When “Sanya” returned and read the message, he immediately went to the police. The Interior Ministry officers went to the call and found the victim alive in his hut, located 170 kilometers from the village of Boguchany. The man was taken to the hospital, nothing threatens his life.

Earlier it was reported that in Alaska, USA, a cyclist fought off a 200-kilogram brown bear that attacked him with a kick. After that, the animal left the American alone and walked away.