A bridge built in June 2021 collapsed in the village of Seltso, Arkhangelsk region 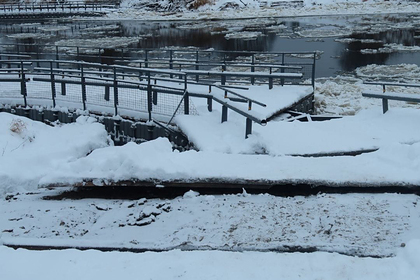 A pontoon bridge across the Yemtsa river collapsed , which was built six months ago. On the construction of the facility spent 20 million rubles, according to News.ru.

According to the prosecutor's office of the region, the collapse occurred on Thursday, November 25. The structure was touched by ice passing along the river. As a result, several settlements were isolated, including Myakurye, Peshemskoe, Ripalovo, Ust-Mehrenga and Pogost. According to the 29.ru edition, a total of 209 people live there. On the fact of the incident, law enforcement agencies organized an inspection. Based on the results, a procedural decision will be made.

The bridge was built in June 2021 by the Khimpromingeniring company. The contractor claimed that the newly erected structure will last 50 years and is resistant to aggressive environments and weather conditions – it can withstand open fire and extremely low temperatures.

In March 2021, the Pominovsky and Starosimonovsky bridges in the city of Valuyki, Belgorodskaya went under water area. Locals have complained that they have been suffering from the problem for decades. In 2018, local authorities promised the Russians to resolve the issue and paved a bypass road.