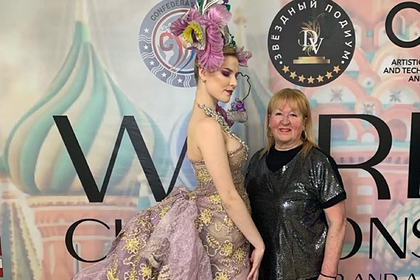 At the last world championship in hairdressing, decorative cosmetics and manicure -year-old Natalya Rogova and her daughter Olga won several nominations. Thus, the residents of Syktyvkar and Moscow became world champions in the skill of haircuts, hairstyles and dyeing. This will be reported in the post of the Russian woman on VKontakte.

In the photographs published on the network, you can see a girl in an unusual outfit with a high hairstyle in the form of white and purple flowers. In the comments, users wrote words of admiration and congratulated the women on their victory.

According to Komiinform, there were more than 200 participants in the professional competition who came from Europe and Asia. The 71-year-old Russian woman became the only one who represented the Komi Republic.

Rogova showed a girl with orchids in the nomination “Fantasy image with apprenticeship additions” and won first place. According to her, “this is a very painstaking and delicate work”, which was created for almost two weeks. The winner explained that a frame was made of wire, on which forms, woven from hair, were then attached. A similar image was developed together with the dress, so that the hairstyle would be in harmony with the outfit and with the makeup.

It is clarified that the hairdresser's daughter went to the competition from Moscow. As a result, she took the Grand Prix in the nomination “Fashionable haircut and coloring”. The pictures on the social network show a model with an oblique haircut, where dark hair covers crimson-orange strands.

In September, the Russians Olga and Ivan became the vice-champions of the world in hugging trees. The first place in an unusual competition was taken by a citizen of Kazakhstan.

Earlier, a Russian pensioner from the Chelyabinsk region broke the sports record in athletics at 80 years old. It was clarified that over the past ten years, he also set more than 15 country records and became the owner of the world record in pentathlon.