“Ukrainian truth”: on the anniversary of Euromaidan, Zelensky secretly rested at a friend's birthday 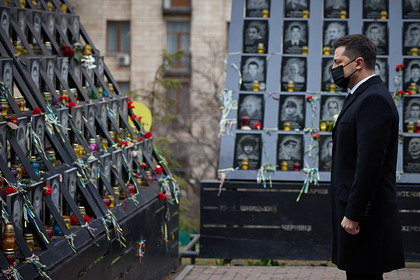 Ukrainian President Vladimir Zelensky and his friend, head of office President Andriy Yermak spent the weekend at the presidential residence in the Carpathians. The politicians, along with other office staff, secretly celebrated Yermak's jubilee while the rest of Ukraine celebrated the Euromaidan anniversary. The investigation was published by Ukrainska Pravda.

According to journalists, on Friday, November 19, Zelensky and Yermak finished their work in the afternoon, boarded a private plane associated with the Privat group of oligarch Igor Kolomoisky, and flew to Ivano- Frankivsk. From there the politicians went to the presidential dacha “Sinegor” in the Carpathians, where, together with other employees of the president's office, they celebrated the 50th anniversary of the head of the office, Andriy Yermak.

Related materials21: 18 – 17 November An investigation into the arrest of 33 Russian mercenaries in Minsk has been published. Zelensky personally participated in the preparation of the operation 00:02 – October 7

“The crisis will come by spring” Zelensky gets rid of political competitors. Why doesn't that help him hold on to power?

The four-day celebration was interrupted by the president on Sunday, having flown to Kiev for the official celebrations of the Euromaidan anniversary. In Ukraine, this day is considered a public holiday and is celebrated as the Day of Dignity and Freedom. Zelenskiy handed out awards to the Ukrainian military, and soon flew back to the Carpathians for his birthday. For personal travel, the Ukrainian president used helicopters of the state emergency service, according to the authors of the investigation.

The Ukrainian authorities responded to the accusations of journalists – there was no use of public or private transport for the president's needs, there was no four-day holiday either. Ermak wrote separately that he spent the entire weekend in Kiev, and did not celebrate his birthday at all. But Zelensky did fly to the Carpathians, but strictly in accordance with the protocol.

Earlier, the opposition went to a rally on the Day of Dignity and demanded that the leadership of Ukraine make a decision on the resignation of the head of the presidential office by December 1. The leader of the Radical Party, Oleg Lyashko, is confident that Zelensky will try to suppress the protests and introduce martial law in the country.