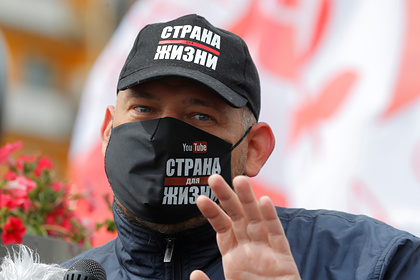 Imprisoned blogger Sergei Tikhanovsky, husband Presidents of Belarus Svetlana Tikhanovskaya, wrote a song called “This Way” about the struggle of Belarusians against the regime of Alexander Lukashenko. You can get acquainted with the composition performed by the musician Kosmas on YouTube.

“This song is instead of his [Tikhanovsky's] last word in court,” write the authors of the Country for Life Youtube channel.

The song is about the tragic events that happened before, during and after the presidential elections in Belarus. In particular, several verses are dedicated to those killed and injured by the actions of the Belarusian security forces, as well as to the participants of mass protest actions in prison. In the composition, Tikhanovsky also called on Belarusians not to give up and continue to confront the current government for the sake of freedom and respect for civil rights.

Sergei Tikhanovsky has been in jail since May 2020. He planned to run for president of Belarus, but his initiative group was not registered. At one of the pickets to collect signatures, the oppositionist was detained and accused of using violence against police officers.

In March 2021, Tikhanovsky was charged with preparing and organizing mass riots, as well as inciting social hatred. The blogger's trial took place behind closed doors on June 24, the announcement of the verdict is scheduled for December 14.