New Atlas: US testing of a single-seat flying saucer began 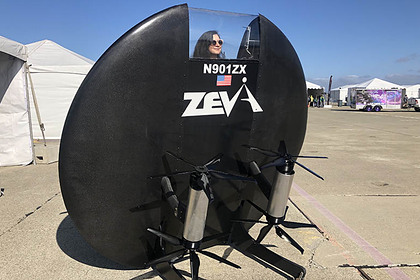 Zeva Aero from the United States presented a prototype flying saucer-shaped aircraft. The developers believe that their development will interest the military. This is reported by New Atlas.

Zero air taxi was made in the form of a disc with a diameter of 2.4 meters. The aircraft weighing 317 kilograms is made of carbon fiber. The Zero received four electrically driven propellers that power a 20 kilowatt-hour battery. The manufacturer emphasizes that during serial production the cost of Zero will be about 250 thousand dollars.

The Zeva Aero device takes off vertically and takes a horizontal position in flight. This makes it possible to use unprepared sites. The concept of the electric apparatus was tested during flight tests of a miniature copy of the Zero. The full-size prototype is being tested using safety ropes.

The manufacturer claims that the flying saucer will be able to fly up to 80 kilometers at a maximum speed of 257 kilometers per hour. The head of Zeva Aero Stephen Tibbits suggested that the Zero will interest the military.

Previously, Rolls-Royce announced that its electric plane broke the speed record. During the tests, the maximum speed of the Spirit of Innovation aircraft was 623 kilometers per hour.