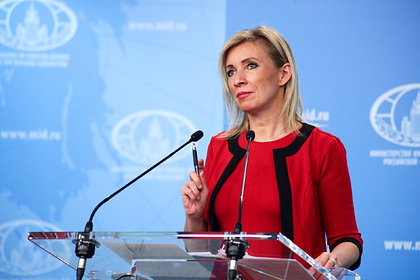 Kiev sabotages its obligations under the Minsk agreements, which leads to the breakdown of negotiations to resolve the conflict in Donbass in any format, and calls for a force-based scenario. This was stated by the official representative of the Ministry of Foreign Affairs (MFA) of Russia, Maria Zakharova, in a comment to the Lenta.ru correspondent.

According to her, the reports of the OSCE Special Monitoring Mission (SMM) testify to the offensive actions of the Armed Forces of Ukraine ( Armed Forces of Ukraine) on the line of contact, which leads to an escalation of tensions and causes serious concern in Moscow. According to observers, the Ukrainian military have advanced their positions at least one kilometer beyond the contact line, the diplomat added.

“Hot heads in Kiev, feeling complete impunity, are in favor of a military solution to the Ukrainian crisis,” she said. official representative of the Ministry of Foreign Affairs of the Russian Federation. She also noted that the Armed Forces of Ukraine regularly resort to the use of weapons prohibited by the Minsk agreements, which Kiev receives from NATO.

In particular, the speaker of the Russian Foreign Ministry pointed out, this is not only about the Turkish Bayraktar drones, but also anti-tank Javelin missile systems. She stressed that the voiced actions of the Ukrainian authorities and their sponsors lead to human losses and the destruction of infrastructure in Donetsk and Lugansk regions.

Earlier, the Commander-in-Chief of the Armed Forces of Ukraine, Valeriy Zaluzhny, said that Ukraine has worked out a new tactic of using Turkish Bayraktar drones and American anti-tank Javelin missile systems. On October 26, Ukraine first deployed Bayraktar in Donbass in battles with the forces of the self-proclaimed Donetsk People's Republic (DPR).