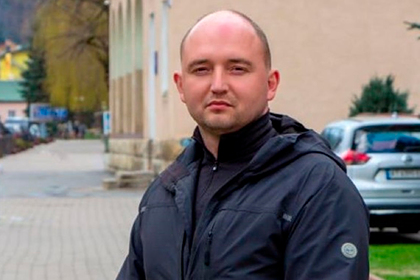 searches were carried out. The party “European Solidarity” reports that the police came to Voloshin on suspicion of involvement in the attempted murder of the first assistant to the President of Ukraine Serhiy Shefir.

The reaction of the European Solidarity party, whose leader is former Ukrainian President Petro Poroshenko, is unequivocal: the case is politically motivated, and the attempted murder of Shefir began to be used to persecute forces opposition to Ukrainian President Volodymyr Zelenskyy. “Zelensky's authorities have struck another bottom in the persecution of the opposition,” they write on the party's official website.

A radical clean-up. Ukraine decided to get rid of the nationalists. Why does the country no longer need the main force of the Maidan? 16: 23-22 September automata

The search took place in Voloshin's personal house and in the house of his parents in the city of Yaremche. According to the deputy, suspicions fell on him because of the coincidence of the caliber of his hunting rifle with the caliber of the weapon from which the presidential aide was fired. “They wake up my parents at dawn, my mother's hands are shaking, my father is worried … Is there any reason for this that I own a 7.62 caliber weapon? There are tens or hundreds of thousands of such in Ukraine, “Voloshin commented on the events.

Investigative measures were taken on the basis of the decision of the Pechersk Court of Kiev. Voloshin himself also added that he had already communicated with law enforcement officers about the attempt on Shefir's life and provided information that on the day of the crime he was not in the capital region.

On September 22, in the village of Lesniki near Kiev, unknown assailants fired on Sergey Sheriff's car from a Kalashnikov assault rifle. The presidential aide was not injured. Zelensky promised a “strong response” to the criminals, and added that such actions will not work to change his state policy.