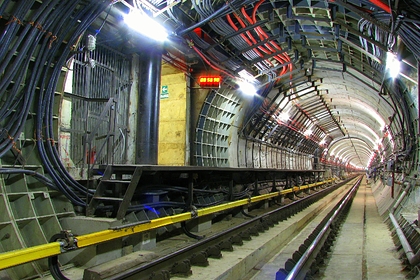 There is a so-called ghost station in the Moscow metro – it functions on the blue line. Attentive passengers can see it, passing between the stations “Krylatskoe” and “Strogino”, according to the Telegram-channel of the Moscow Department of Transport.

The mysterious platform called “Trinity-Lykovo” is equipped on one of the longest subway runs , told in the Department of Transport. It has an attendant's room, an electrical substation, corridors, and a ventilation shaft. The station is an evacuation exit, they are placed on long hauls for the safety of passengers.

“Trinity-Lykovo” is not on any scheme of the Moscow metro. “You can see it if you come close to the left door window while driving from Krylatskoye to Strogino. Look carefully – the train will pass quickly and will not stop, “the message explains.

Last October, a fare collection system using FacePay was launched at all Moscow metro stations. According to the authorities, Moscow has become the first city in the world to launch such a fare payment method. Citizens can use FacePay at will, they can pay for travel in the usual ways.