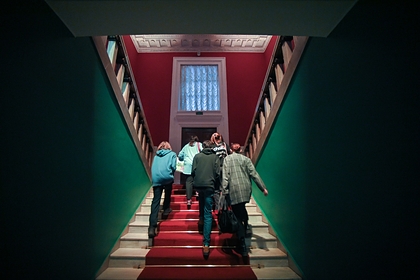 At the School of Modern Play, on November 24 the final of the “Theater without Borders” competition – a joint project of the Federation of Creative Industries and the 5th Festival “Biennale of Theater Arts. Directing lessons “. The laureates received grants for the implementation of the sketches presented. The prize fund was 3,000,000 rubles. The laboratory was held within the framework of the “Scene of the Future” project with the support of the Presidential Fund for Cultural Initiatives.

“Theater without Borders” is the first and only project in Russia aimed at updating the form and content of contemporary art based on cross-industrial interactions.

Within the framework of the laboratory, participants created sketches of future productions of a new format outside the usual box-stage. Shows-excursions, performances under water, digital theater – the contestants proposed revolutionary ideas, in the implementation of which they were helped by representatives of various cultural industries – specialists in the field of fashion, sound, architecture, etc. Young directors and students of creative universities took part in the competition. p>

The competition was held in several stages. The long list included 15 participants, then a short list of seven people was formed and, finally, three winners were determined.

Artem Galushin became the owner of the main prize – 1,200,000 rubles for the implementation of the presented production. He presented the performance-installation “K.” based on Franz Kafka's novel “The Castle” and the story “Metamorphosis”. It is a kind of a theatrical museum with exhibits filled with the life story of the writer and his hero.

The silver medalist was Elena Nenasheva and her performance “Body”, for the implementation of which, as a reward, the organizers provided a grant of 1,000,000 rubles. This project is an attempt to slow down and draw attention to the absolute miracle of nature – the human body. What role does it play in our culture? How does it work? How does it affect our lives? How do we interact with ourselves and others? This setting invites you to ponder over these kinds of questions.
Bronze – Elina Kulikova. She received 800,000 rubles as a prize for the implementation of the sensitive performance “Sinete”. Her project is a sensual experiment. Smells, tastes and tactile sensations are the main components of the production.

The award ceremony was held by the General Director of the Federation of Creative Industries Igor M. Namakonov and art directors of the Festival “Directing Lessons” Olga Egoshina and Marina Tokareva.

< p>“We have received many new discoveries, many new theatrical names. There was a breakthrough, and it is very joyful that it happened precisely within these walls of the School of Dramatic Art – a theater consecrated in the name of Grotovsky, which was made by Anatoly Vasiliev. The genius of the place clearly helped the participants in their creative quest. All seven projects are worth living and developing. And I hope we will continue, “Olga Egoshina, a theater expert, doctor of art history, professor of the Moscow Art Theater School, said in her opening remarks.

Also in the finals of the “Theater without Borders” took part: Oleg Bilik and his project on the music of space “Architecture of Sound”; Maria Zelinskaya and the documentary travel show “Don't Let Me Go” about missing people, about the work of search teams and rescuers; Alexandra Lovyannikova and her quest production, full of tricks and miracles, the scene of which is the library; Ilya Kharlanov, who presented the performance at the intersection of musical art and video mapping, is a philosophical reflection on the main issues of being in the format of a meditative visual and sound performance.

Igor M. Namakonov, General Director of the Federation of Creative Industries, spoke about the importance of the project for FCI. “Theater without Borders” provides an opportunity to explore and test the format of cross-industrial laboratory competitions. One of the areas in working with creative industries that needs to be significantly strengthened is the development of the practice of project interaction between representatives of different CIs. This vector of activity is as important for us as interaction with the state and the development of regional infrastructure, “he said.