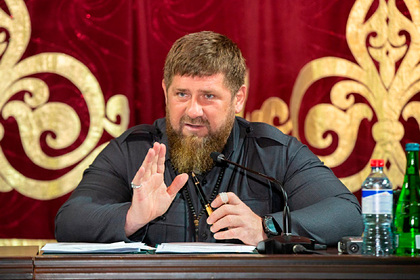 The head of Chechnya, Ramzan Kadyrov, during a meeting in Grozny, said that if Ingush activists did not stop making claims about the demarcation of the border between regions in 2018, he would appeal to the Russian authorities with a request to intervene in the dispute and reconsider the decision to transfer lands to Ingushetia, taken during the self-proclaimed Chechen Republic of Ichkeria. The video of the speech was published on his VKontakte page, the translation is quoted by the Kavkaz. Realii “( included by the Ministry of Justice in the register of organizations performing the functions of a foreign agent ).

“If we do not agree with what we have done, then we will ask the leadership of the state to make the right decision (…) Thus, our eight settlements will return to us,” Kadyrov said. He also asked the Chechens and Ingush not to succumb to provocations and not stoop to the level of mutual insults. According to the head of Chechnya, the peoples will always be brothers, “despite the pathetic attempts of some crooks.”

A new land conflict between the regions began after Ingushetia was outraged by reports of repair work in the Ingush settlement of Dattykh, Sunzhensky District, bordering Chechnya. Netizens called what was happening as another provocation of neighbors. In response, the head of Chechnya threatened that he could take away by force from Ingushetia the lands “illegally transferred [by the first president of the self-proclaimed Chechen Republic of Ichkeria Dzhokhar] Dudayev.” According to Kadyrov, if the Ingush want to live on Chechen lands, they will be leased. Speaker of the Chechen parliament Magomed Daudov confirmed Kadyrov's threat, noting that, in his opinion, the Ingush side is engaged in provocations.

The Chechen side proposed to resolve the issue of Sharia law and called the representatives of the Council of Teips of Ingushetia for trial at the Fortanga River on the border between the republics. Later, Daudov said that he had been waiting for the Ingush side at the appointed place for three hours, but no one came. The council, in turn, stated that Daudov's proposal to come to Fortanga and swear on the Koran does not comply with Sharia norms.

In 1993, Dudayev and the first President of Ingushetia Ruslan Aushev concluded an agreement according to which the Sunzhensky region, with the exception of the populated points Sernovodsk and Assinovskaya, went to Ingushetia. However, the final demarcation of the border did not take place, and in 2012 Ramzan Kadyrov asked the federal center to establish an administrative border with Ingushetia. In September 2018, the then head of Ingushetia, Yunus-Bek Yevkurov, and his Chechen counterpart, in the presence of Aleksandr Matovnikov, then the representative of the President of Russia in the North Caucasus Federal District, signed an agreement on the establishment of the border. In accordance with the document, Chechnya handed over to Ingushetia a part of the Nadterechny region – a mountainous and wooded area. Ingushetia, in turn, transferred to Chechnya an equivalent territory on the border with the Malgobek region.