The Drive: Russian T-72 and T-80 tanks are being modernized to protect against drones 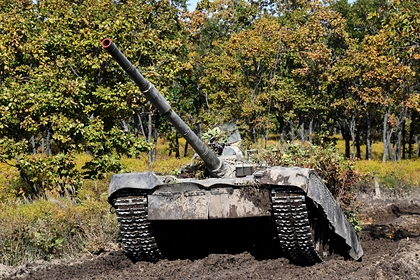 Russia's invasion of Ukraine, Russian tanks could be upgraded to protect against loitering ammunition and other unmanned aerial vehicles in Kiev's possession, according to The Drive.

The material tells about experimental models of tanks, in particular, the T-72 and T-80, which are distinguished by the presence of special armor and mesh structures that provide additional protection, including from above. The publication writes that, probably, we are talking about experimental products, and not serial machines.

The Drive admits that such a modernization could potentially reduce the effectiveness of the use of the FGM-148 Javelin missiles, which the United States transferred to Ukraine. Russia is currently “learning from the conflict in Nagorno-Karabakh, when Azerbaijani forces used Turkish Bayraktar TB2 drones.” showed in the fight against tanks.

In November, John Denis, professor at the Institute for Strategic Studies at the US Army War College, spoke in a column for the Defense News about NATO's likely actions in the event of Russia's “invasion” of Ukraine. The expert is sure that if the Russian military borders Ukraine crosses Estonia, Latvia, Lithuania, Poland and Romania formations of the NATO Rapid Reaction Force will be sent, which “would calm the population of these countries, mean the solidarity of the entire alliance and strengthen security in the east”.

In the same month, the Military Times, citing a statement by the head of the Main Intelligence Directorate (GUR) of the Ministry of Defense of Ukraine, Kirill Budanov, reported that Kiev for the first time used American portable anti-tank missile systems FGM-148 Javelin in Donbass. p>