In Pskov, on Kalinin Street, a mural with the image of Viktor Tsoi appeared 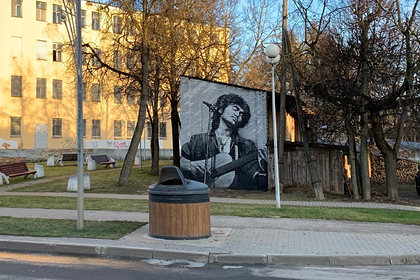 A mural with a portrait of the founder and leader of the Kino group was painted on the facade of a building on Kalinin Street. It is noted that the initiative to create the picture belongs to the vice-speaker of the Pskov regional assembly, director of Pskov-Polymer LLC Yuri Sorokin.

According to the publication, recently another object was installed on the mentioned street – a music bench with forged decorative elements .

In October it was reported that a wall of memory of the Soviet rock musician Viktor Tsoi was opened in the capital of Kalmykia, Elista. Graffiti with a portrait of the legendary performer and his quotes was painted by the artist Elizaveta Telkova (Art Komori). Street art adorned the wall of the Bagatur sports center in the Druzhba park.

Viktor Tsoi died in a car accident in Latvia on August 15, 1990 at the age of 28. The musician was unable to fit into a dangerous turn at high speed. His death was a tragedy for an entire generation.