A terrifying encephalyartos blossomed in Tomsk, which surprised Russians with an orange “cone” 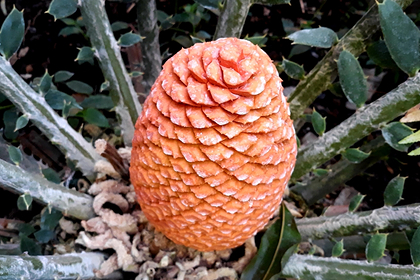 surprised the Russians with his large and unusual orange “bump”. This is reported on the official website of the organization.

It is specified that this is the rarest gymnosperm plant that appeared on the planet before the era of the dinosaurs. “Many of them [encephalyartos] are now under protection, are extremely rare in natural habitats, but at the same time are preserved in the collections of botanical gardens,” the experts said.

The sex of the plant can also be determined by the structure of the “cone” … “Our encephalyartos is a boy,” the organization explained. The International Union for Conservation of Nature (IUCN) had to include this species in the list of rare plants, since the encephalyartos is “close to a vulnerable position.”

Such a plant was common in southern Africa. Local tribes mined starch from it. Currently, it is rarely found in the natural environment.

Earlier it became known that the Russians wanted to save the orchids growing in the vastness of the Crimea, and developed a new effective method of microcloning. It can be used to restore the number of plants in the Red Data Book.

At the end of July, an “alien orchid” bloomed for the first time in Tomsk. She was named after the ancient Greek goddess Psyche. In the Tver greenhouse, Cattleya Gaskell, the “queen of orchids”, also showed her flowers.

Meanwhile, in the Yekaterinburg garden, a devil's tongue began to bloom, which gives off “small transparent, slightly viscous” drops, exuding the smell of rotten meat. p>