Ukrainian journalist Drozdov: President Zelensky was caught in a lie, smacks of treason 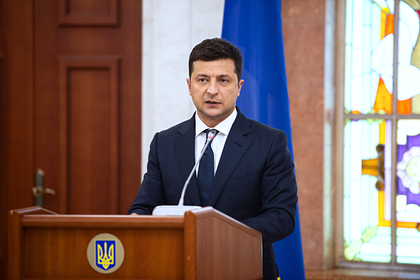 Ukrainian journalist and TV presenter Ostap Drozdov said caught in a lie, which “smacks of treason.” He announced this on the air of the “Fourth Channel”, the broadcast was conducted on YouTube.

This is how the journalist commented on the action of the nationalists, who deployed a banner in the center of Kiev accusing Zelensky of lying. According to Drozdov, this is a warning and a “mark” for the Ukrainian president.

“They caught (Zelensky) in a lie that smacks of high treason,” he said.

Drozdov suggested that the statements about the “Russian threat” that are regularly heard in Kiev may be related to attempts to divert the attention of Ukrainian citizens from what is happening in the country. “As high treason loomed – so immediately” (Russian President Vladimir) Putin attacks. It's all Putin. Whoever is against Zelensky is an agent of the Kremlin. ” These cheap tricks with the substitution of concepts no longer work, and the grandiose nix has already begun, ”the presenter said.

installed. According to him, there is no “mole” in Zelensky's office.

On November 20, the former head of the Main Intelligence Directorate of the Ministry of Defense of Ukraine, Vasily Burba, said that a “mole” operates in the Ukrainian government, working in the interests of Russia.

On July 29, 2020, Russians were detained in Belarus on charges of preparing riots before the presidential elections. Some of them had Ukrainian passports. Kiev requested their extradition, but the Wagnerites returned to Russia. Later, the editor-in-chief of the Ukrainian website Censor.net, Yuri Butusov, said that they wanted to lure out the Wagnerites and use them to exchange prisoners with Moscow, but the operation fell through because of Zelensky. In turn, Zelensky called it nonsense.