The cost of lard in Ukraine in November soared 2.5 times to a record level 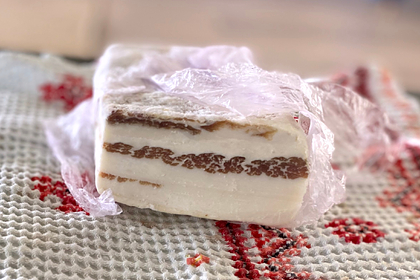 several times, significantly updating the historical maximum. At the beginning of the month, a popular product in the country could be bought in large supermarkets at a price of 200 hryvnia per kilogram (560 rubles), but by the end of the month the cost had risen to a record level of 500 hryvnia (1.4 thousand rubles). RIA Novosti writes about this with reference to the data of the Ministry of Finance of the country.

The reason for this situation was the reduction in the number of greasy pigs, which are usually raised by small farms. In the current economic situation, due to the increase in the cost of feed by 20-40 percent and the increase in electricity tariffs, it has become unprofitable to keep them. Because of this, farmers are massively switching to meat breeds.

The Association “Pig Breeders of Ukraine” confirmed that the bulk of production in the country is represented by farms raising pigs for meat. In this regard, lard, as a niche product, has formed a significant deficit.

At the same time, in general, animal husbandry in the republic is in decline. After the African swine fever epidemic in 2019, less than six million pigs remain in Ukraine, which is two million less than in 2014. The situation in private farms is deteriorating – in the first half of this year they lost 8.5 percent of their livestock.

Currently, the basis of the Ukrainian market of lard is an imported product. In the first three quarters, local enterprises produced 6.5 thousand tons of lard, and supplies from abroad amounted to 25 thousand tons, with 14 thousand from Poland.

Earlier it was reported that at the beginning of November Ukraine began to import for the first time fresh cucumbers from Russia. Experts believe that the reason for such purchases was the rise in the cost of electricity in Ukraine and the overproduction of the product in Russia.