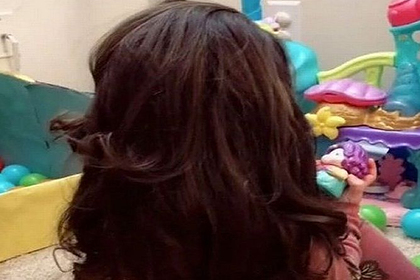 A woman showed off her two-year-old's hair and surprised netizens. The video posted on TikTok was noticed in the Daily Star.

A user with the nickname Babyahair showed off the hairdo of her daughter Aubree. The footage posted on the web shows thick wavy curls of chestnut color, the length of which reaches the girl's waist. According to the woman, doctors predicted Aubrey's hair would soon fall out, but every month it becomes thicker and longer.

The blogger explained that she tries to avoid exposure to heat on her daughter's hair so as not to spoil its quality. In addition, she only occasionally uses a hair dryer to speed up the drying process. “My hair started falling out after I gave birth to her. Now I understand why, “she signed the post that made her famous on the social network, gaining 14.4 million views and 2.6 million likes.

Aubrey's subscribers admired Babyahair's appearance. “I thought it was a wig because I had never seen hair like this on a child in my life. This is absolutely wonderful “,” She looks like a Disney princess “,” This girl has the most beautiful hair in the world “,” Magnificent curls! ” one of the 100 owners of “Einstein's hair” in the world and became famous. Florence Patterson, 6, suffers from uncombed hair syndrome. The characteristic symptom of this disease is the dry, vitreous structure of the curls, which does not lend itself to styling. The described ailment occurs worldwide in only 100 people, including the scientist Albert Einstein.